As You Like It – by the Melbourne Theatre Company

Having throughly enjoyed the opening night at the Sumner Theatre last Thursday, I cannot do better than share and publicise Patricia Maunder‘s lovely review in Limelight magazine of the Melbourne Theatre Company’s latest production of Shakespeare’s As You Like It – which is playing at the MTC Sumner Theatre until December 18th 2021.

Credit for all the images go to Jeff Busby

More than four months after cancelling Virginia Gay’s Cyrano almost before it had so tantalisingly begun, MTC returns after another couple of lockdowns with a feel-good classic. As You Like It includes Shakespeare’s favourite comic tropes: a cross-dressing heroine, a wickedly wise fool, unpolished common folk and romantic muddles. Director Simon Phillips chooses to downplay their potential for big laughs, however, preferring an almost contemplative approach. In contrast, this production’s design is stunning. 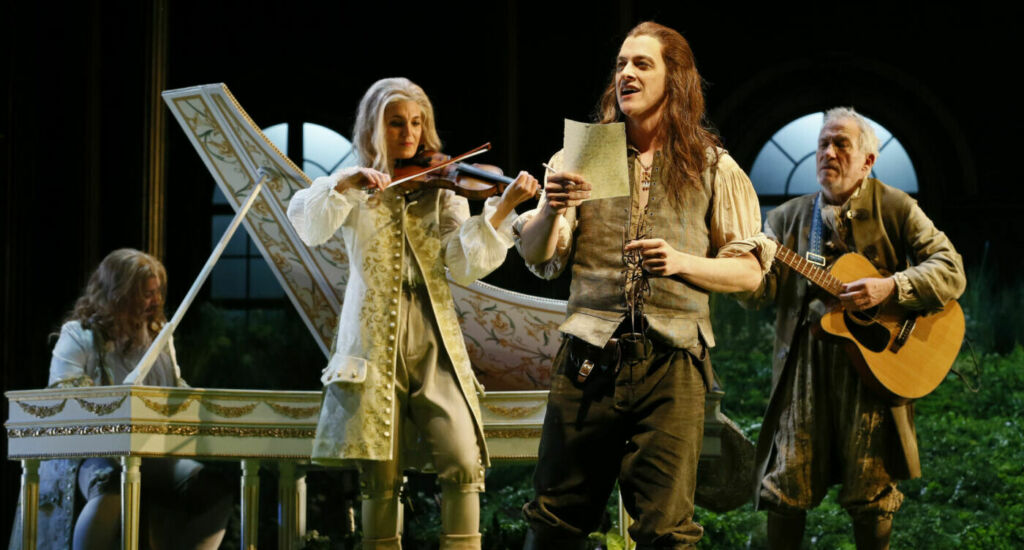 Anyone who saw MTC’s previous Shakespeare production probably can’t help but make comparisons between the two. Also directed by Phillips, Twelfth Night opened almost three years ago to the day, but was a thing of such joy, energy and beauty that it remains vivid in my mind at least. The physical humour, sight gags and vocal playfulness crucial to its success are much reduced in As You Like It, which pursues a more subtle, thoughtful style that charms but rarely delights or inspires laughter.

In fairness, this play is more philosophical than Twelfth Night. It’s set mostly in a forest, a place removed from the court, the city and even from reality, where characters are transformed. Literally by dressing as a man in the case of Rosalind, but above all they are transformed by love and understanding. The good guys are rewarded, and the cruel, capricious relations who forced them to flee into the forest are ultimately redeemed here. For Melburnians who were psychologically lifted by green spaces during six lockdowns, the transformative power of As You Like It’s forest will have particular resonance. Indeed, the mellow tone of this production may be rooted in the pandemic.

In the pivotal role of Rosalind, Christie Whelan Browne is assured, at times almost serious, offering only occasional flashes of her comic talents. As her true love, Orlando, James Mackay is unerringly pleasing, while Rosalind’s beloved cousin, Celia, is interpreted with understated feistiness by Georgia Flood. Apart from a couple of naughty gestures, and a little poncing that’s perhaps more due to costume than performance, Daniel Frederiksen plays Touchstone with a restraint rarely seen in Shakespeare’s fools. 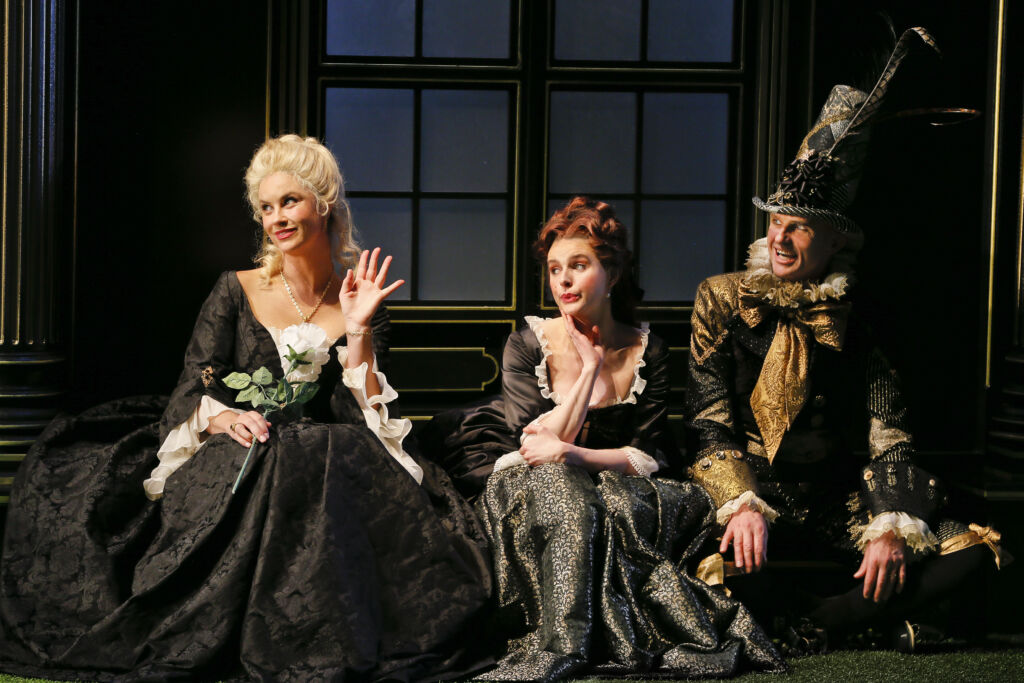 The rest of the 13-strong cast (which I’m pleased to report is not an all-white affair) do double-or-more duty. Notable among them is Richard Piper in his 40th MTC production. He dials down his well-known capacity for enthusiastic comedy as suffering servant Adam and taciturn, philosophical shepherd Corin. As this character’s posh philosophical counterpoint, the melancholic Jaques, Tim Walter exudes a bittersweet gravitas.

Indeed the whole supporting cast is on point, from Shivantha Wijesinha’s good duke and bad duke, to Natalie Abbott’s shepherdess, Phoebe, who both spurns and chases love. Many of them also slip in and out of the band that blends into the action on stage, singing sweetly and playing instruments such as guitar, tambourine and drums with dreamy gentleness. Twelfth Night alumni Kate Miller-Heidke and Keir Nuttall have once again created appealing original music that’s part Shakespeare sonnet, part indie-folk whimsy.

Alicia Clements’ design, enhanced by Nick Schlieper’s golden lighting, almost steals the show. The play opens on a shallow set of sternly elegant columned architecture. It’s black highlighted in gold, a colour scheme reflected in the opulent costumes of the characters at court. From wigs to boots, the design places the action several decades after Shakespeare’s death in the Restoration period. 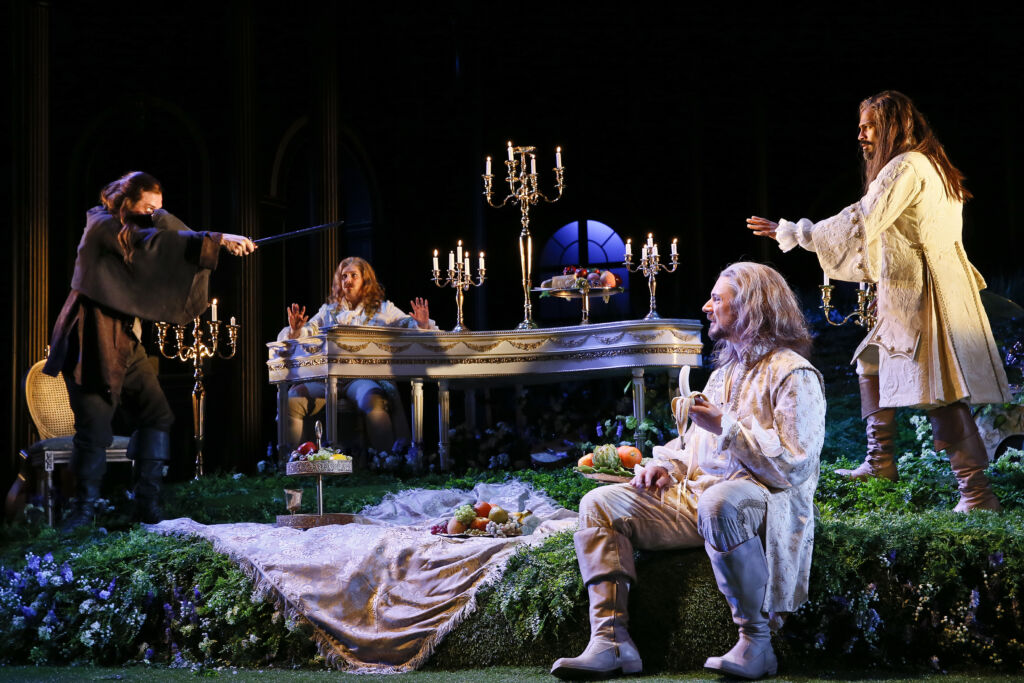 The costumes delight the eye, but the large set revealed a few scenes into the play is eye-popping. The forest where the rest of the action takes place is presented as a bucolic fantasy of lush, layered greenery, contrasting with a more open take on the court’s black architecture in the background. This gorgeous set, which keeps the tension between forest and court and all they represent in mind, is populated by characters in pale earthy-toned costumes of much less rigid design than court attire.

An otherwise subtle affair, this As You Like It may not be quite as you like it, but it’s certainly a confident and very welcome return to the stage by the MTC.

This entry was posted on November 20, 2021 by Dr. Sanjiva Wijesinha in Opinion, Theatre and tagged as you like it, melbourne theatre company, shakespeare, simpn phillips.