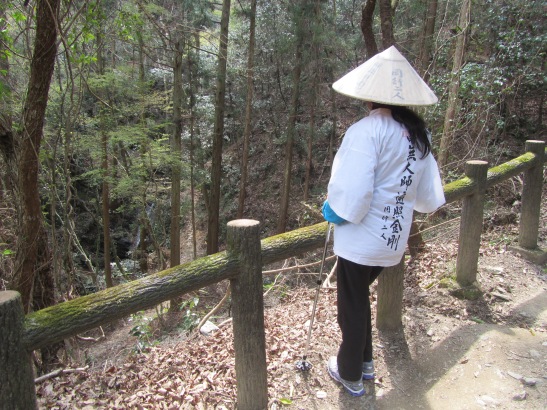 Most Sri Lankan visitors to Japan visit major cities like Tokyo and Osaka, and the “must see” tourist sights like Kyoto, Nara and Hiroshima. These are places that are well known – and well worth seeing.

But I would suggest if you go to Japan that you venture off the tourist track and go to Shikoku, the smallest of Japan’s four main islands.

Tucked into the gulf (called the “Seto Inland Sea”) formed by the larger islands of Honshu and Kyushu facing its west coast, Shikoku’s east coast faces the Pacific Ocean. It is sparsely populated – there are less people living on this island than in Singapore – but the island is well connected to the rest of Japan by expressways and rail links.

Shikoku’s claim to fame as far as we were concerned is that it is the site of the famous Henro Michi– the pilgrim circuit that is travelled by around 100,000 pilgrims annually. The pilgrimage takes one to each of the 88 temples on the island associated with the founder of Japan’s Shingon Buddhist sect, the Buddhist monk Kukai (Kobo Daishi). The entire pilgrim trail, about 1200 kilometres long, circumnavigates the island – and those who cover the entire distance on foot take about eight weeks to complete it. Most Japanese nowadays do the pilgrimage by car or train – or in bus groups like the typical Vandana gamanas in our own country – but there are still many who undertake the journey on foot.

Five years ago I had walked the 800 km Catholic pilgrim trail in Spain, El Camino de Santiago. The time was now right for me to undertake another pilgrimage, albeit a different one! I must confess that I am not a person given to religious ritual – in fact I would probably not even describe myself as being particularly religious. So having already had the experience of walking a Catholic pilgrim trail, the opportunity to undertake this Buddhist pilgrimage appealed to me – and last month we set off to Japan to walk part of the Shikoku Pilgrim Trail.

We flew into Osaka, from where a convenient two and a half hour coach journey took us to Tokushima, the main city on Shikoku. Temple Number One on the trail, Ryozen-ji, is located in the village of Bando just outside Tokushima – and this is where most pilgrims begin their journey. They are easily recognised by the typical pilgrim garb they wear – a white vest (hakui) and a conical sedge hat (sugegasa) – and they carry a traditional walking staff plus an album in which they obtain a stamp from each of the temples they visit.

The people of Shikoku are accustomed to seeing strangers wearing hakui and sugegasa walking through their island – and they often offer drinks and food to these pilgrims. Many were the occasions when we were stopped by complete strangers and given little items – a few fruits, a bottle of soft drink or cup of tea, a bag of cherry tomatoes – to help us on our journey.

We did not have the time to visit all 88 temples, so had planned at the outset to only visit the 23 temples in Tokushima prefecture on this visit – leaving the temples in Shikoku’s other three prefectures (provinces) for a future visit.

The temples we visited were all traditionally built of wood with gracefully terraced spire-topped roofs, some older than others, each having its own Honzen(guardian deity) and all having statues of the Buddha, Kobo Daishi and various other Bodhisattvas and deities. Some of these temples are situated in uninspiring urban settings, cheek by jowl with shops and dwellings – while others, far from the madd’ing crowd, are set in pristine wilderness on the tops of mountains. Temple No: 12, Shosan-Ji, at 700 metres above sea level the highest of them all, is reached by an exhausting 12 km hike through the mountains – but as one approaches, the sight of temple set amidst a lush cedar forest is a fitting reward for the arduous six hour climb.

Our walk took us along mountain trails and cedar forests as well as city roads where the monotony of asphalt was only relieved by the sight of so many exquisite cherry blossom trees in bloom.

If I may quote an earlier Canadian pilgrim, Robert Sibley, the pilgrimage allows one to “wander deep into Shikoku’s verdant valleys, stand on mountain ridges offering timeless panoramas of sea and sky and landscape, and stroll through thatch-roofed villages that had not changed in centuries”.

It is certainly a pilgrimage worth walking.