Serenity and silence in a charming colonial relic 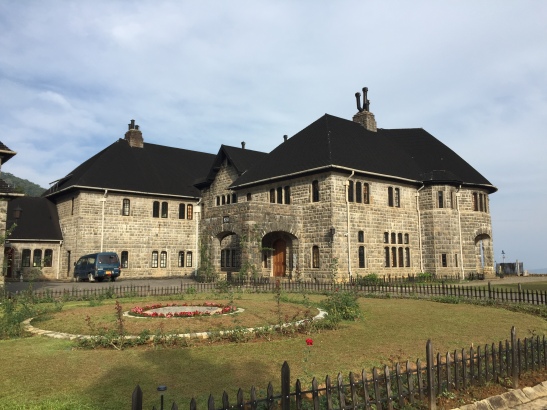 I am seated on the cement garden seat in the corner of the well maintained lawn, peacefully gazing at the magnificent grey-stone building that looks majestically down on me.

Beyond the low parapet wall are the Haputale hills, now shrouded in mist but waiting patiently to be bathed in the morning sunshine.

This is Adisham, the lovely stone mansion built by Sir Thomas Villiers during colonial times in the style of the manor houses of England’s landed gentry.  Named after the village of Adisham in Kent where Sir Thomas was born, the mansion was aptly described as a ‘homesick Englishman’s dream home in the tropics’. It is a charming relic of our colonial era.

Thomas Villiers, whose mother Lady Victoria Russell was the daughter of former British Prime Minister Lord Russell (and the paternal aunt of the philosopher Bertrand Russell) was a descendant of the Dukes of Bedford, among the richest landowning aristocratic families in England at the time. Thomas (being only a grandson of the 6th Duke of Bedford through his mother) had no chance of inheriting the vast family estates – so he decided to come out to Ceylon in 1887 and seek his fortune as a tea planter. Starting out as a creeper on Elbedde Estate in Bogowantalawa, the enterprising young man in due course began his own tea plantation Dikoya Group – and by 1905 was able to join George Steuart and Company, rising to become its chairman in 1928.

Back in England, Sir Thomas would have had no chance of succeeding to the title or the estates of the dukes of Bedford – but out here in Ceylon, by acquiring vast tracts of fertile tea lands, he could aspire to becoming a colonial “lord’. In his 1951 book ‘Some Pioneers of the Tea Industry’, he wrote ‘..office life or industrial life did not appeal to everyone, many of them looking for an open air life.  Agricultural life in England was on the decline.  The usual openings in the Navy and Army were very keenly competed for. Ceylon seemed to many of them to offer just the life they wanted.’

Not only did Sir Thomas establish himself successfully in the commercial world of the colony, he played a significant role in public life as well, being a member of the Legislative Council from 1924 to 1931.

While he was Chairman of George Steuart, Sir Thomas began building his dream home. Selecting an idyllic site in Haputale with commanding views across the hills towards the highest mountain ranges of the island, he had the building designed in Tudor style with long turret windows and chimneys – a retreat in this tropical colony of a wealthy Englishman nostalgic for the scenes of his boyhood. In building Adisham he was allowing himself to show his peers that he belonged to the landed aristocracy – and was a duke, albeit a colonial duke, in his own right. Sir Thomas and Lady Villiers regularly entertained Ceylon’s social elite of the day – the house parties at Adishamduring his time included the governor and distinguished visitors to the island.

When Sir Thomas retired to England in 1949, the property was sold to Sedawatte Mills – and in 1961 it was acquired by the Roman Catholic Church which converted it into a monastery.

Situated about 3 km west of Haputale and easily accessible by three wheeler, Adisham today houses a small community of monks belonging to the Order of Saint Benedict. The monks use the outer building to run a low key motel-type operation. With three comfortable rooms, the simple accommodation they provide allows secular folk like us to avail ourselves of the opportunity of spending time in these tranquil surroundings.

The gardens and orchard established by Sir Thomas are well maintained – the orchards providing fruits that the enterprising monks convert into the famous marmalades and jams for which Adisham has acquired a well-deserved reputation.

Adisham today is a place where one can appreciate the beauty and grandeur of mist shrouded hills and sweeping mountain vistas, marvel at the achievements of Sir Thomas – and experience silence, serenity and solitude.

2 comments on “Serenity and silence in a charming colonial relic”

This entry was posted on November 28, 2016 by Dr. Sanjiva Wijesinha in Uncategorized.