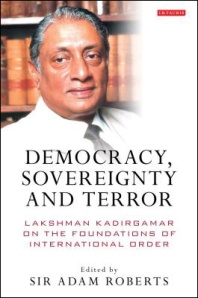 I had the opportunity recently of browsing through a book entitled Democracy, Sovereignty and Terror: Lakshman Kadirgamar on the Foundations of International Order.

Edited by Sir Adam Roberts — a friend of Kadrigamar, President of the British Academy and Emeritus Professor of International Relations at Oxford – the book starts with a series of reflections about the man. This first section written by his contemporaries serves as an insightful introduction to Lakshman Kadirgamar and a background to those who may be unfamiliar with our nation  —  but it is the second section containing eleven major documents written by Kadirgamar himself that are the most significant for us

When Lakshman Kadirgamar retired from a successful career as an international lawyer in Geneva, he didn’t take the easy option. While most people in his position would have rested on their laurels and enjoyed a well-deserved retirement, he decided to enter politics in this country – and soon became Sri Lanka’s Foreign Minister.

What followed was a most impressive political career. Despite the ever present threat of assassination by the Tamil Tigers, who viewed him as doubly dangerous because he was ethnically Tamil but showed absolutely no sympathy for the Tiger cause, he courageously continued his work — until he was killed by an assassin at his home in 2005.

In 1963, he had been commissioned by Amnesty International to investigate the resistance campaign that year against the regime of President Ngo Dinh Diem in South Vietnam – being the first person to conduct an Amnesty International investigation into a country. His surprisingly upbeat, hope-filled report on Vietnam, where he found people who had suffered greatly but still refused to take revenge, quite likely influenced his later thinking on the subject of reconciliation after conflict.

Speaking to officer cadets at the Kotelawala Defence Academy in 1996, he emphasised the importance of behaving justly, saying “we are fighting ultimately to build a lasting peace in our country that can only come about by welding the communities together – not driving them apart.”

In fact, his view of democracy seemed to have been influenced by his legal background, based on rational evaluation rather than emotion — a mature and statesman-like view from a man whose primary motivation was to serve his country.

“So-called educated people must not shirk responsibilities in public life,” he once wrote. It is a sentiment applauded by Baron Patten of Barnes (former Governor of Hong Kong who was a few years junior to Kadirgamar at Balliol College Oxford) who writes about just how important Balliol College and its tradition of public service was to Kadirgamar.

He was without doubt the finest foreign minister Sri Lanka has ever had – a foreign minister who was successful in changing international opinion about Sri Lanka and the LTTE. His efforts in getting the LTTE listed as a terrorist organization certainly contributed to its ultimate defeat in 2009

What comes across in the book is the story of a gentleman, a man of honour determined to do his duty, a statesman who utilised his gifts of eloquence and rational thought to warn the world about threats to its freedom. He wisely observed “It is absolutely no good for any country to say ‘it is not our problem; thank heaven, it is somebody else’s problem’. You can’t say that any more…because the terrorist who was sitting on somebody else’s doorstep yesterday could be on our doorstep tomorrow.”

And Kadrigamar did much more than just warn the world during his time as our Foreign Minister, taking many practical steps both at home and abroad to deal with the terrorist threat.

Browsing through Roberts’ book, one is reminded – and saddened by the fact – that his death deprived our country of a man of courage, wisdom and enlightened counsel, who could have contributed so much to post war Sri Lanka