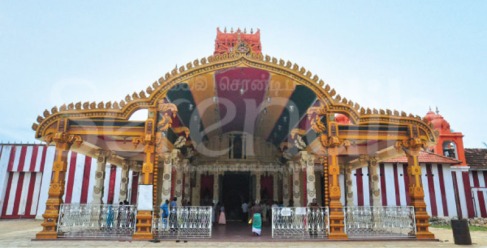 My decision to make a trip to the northern peninsula of my homeland Sri Lanka recently was basically to see for myself how this part of the country had recovered after the long war which ended just four years ago.
And here I was, seated by myself on the beach at one of the northernmost points of the island – at Kankesanturai, a place known as KKS to most English-speakers in this country. Ahead as far as my eyes could see was an expanse of turquoise blue water stretching out to the far horizon. I had woken up early that morning for the sole purpose of savouring a beautiful sunrise – and now in the evening I had returned to the selfsame spot to treat myself to a view of a soul-satisfying tropical sunset.
Relaxing in this peaceful and tranquil setting, I found it hard to imagine that not long ago the northern peninsula of Sri Lanka was a dangerous war zone. Even the now peaceful sea off KKS was once the scene of some ferocious sea battles. Today, four years after the war ended, visitors like me can stay at holiday resorts in KKS where I was reliving old memories and enjoying a restful holiday far from the madd’ing crowd.
This was the third day of my stay in the Jaffna region, although I had spent the previous week touring many other parts of the Island. Located less than 50 miles (80 km) off the southern tip of India and between five and ten degrees north of the equator, Sri Lanka without doubt is historically, geographically and culturally a part of South Asia. Yet (as any Sri Lankan will proudly assert) the nation is delightfully different from its giant neighbour India.
The previous day I had been to visit the city of Jaffna, capital of – and the largest metropolis in – the Northern Province. Newly constructed buildings and many ongoing road works showed how much is being done to aid Jaffna’s post-war recovery. I spent the morning doing a walkabout in the central part of the city, simply taking in the sights, sounds and smells of the place. I even stopped to get a haircut at a little barber shop, at 150 rupees (just over one US dollar) easily the cheapest haircut I have had! I had not spoken Tamil for many years – and the barber’s English was of a similar standard to my Tamil! – but we managed to have a pleasant conversation as he expertly dealt with my unruly mop of grey hair.
Later that day I walked over to the 17th Century Dutch Star Fort that overlooks the Jaffna lagoon – once considered by historians and archaeologists to be one of the largest, strongest and best-preserved forts built by an European colonising power in the East. Today the Government Archaeological Department with assistance from the Netherlands Government is carefully restoring the Fort together with the historic Dutch Church within its walls.
An absolute ‘must see’ for those visiting Jaffna is the Nallur Kandasamy Kovil – an architecturally stunning Hindu temple whose main entrance is dominated by a colourful and intricately carved five storey tower (Gopuram). Many years ago I had spent a week of my August school holidays in Nallur with one of my school friends, and was fortunate then to attend the temple with his family and witness the colourful and impressive annual temple festival.
Outside the August festival period, the best time to visit the temple is when the evening poojas (services) are held. The first commences punctually at four in the afternoon. Visitors are welcome to participate, provided that in keeping with ancient tradition males remove their shirts and females cover up. Sleeveless tops, singlets and shorts are not permitted within the temple. It was a moving experience to sit among the devotees inside the temple, listening to the music and chanting of the priests.
I even managed to make a day trip by boat to a couple of the outlying islands – Nainatheevu or Nagadeepa with its ancient Buddhist temple, and the relatively sparsely populated Neduntheevu or ‘Delft Island’ with its famous giant baobab tree, wild ponies and picturesque beach. A swim (what Sri Lankans refer to as a “sea bath”) in the Indian Ocean off the islands and in the now tranquil sea off KKS were pleasures that I had enjoyed on trips to Jaffna in the sixties and seventies – and lying in these warm tropical waters certainly brought back happy memories.
I took the opportunity to speak with my old friend – well known economist Dr. Indrajith Coomarswamy, former Director of the Economic Affairs Division of the Commonwealth Secretariat. “The government is going ahead”, he observed “with restoring infrastructure and housing which should strengthen the growth framework; however these areas also need private investment.  It is in these efforts that the Sri Lankan Diaspora, if it so desires, can play a massive role.” I have realised that the challenge for the nation today is to create an overall environment, which encourages and facilitates engagement with the many Sri Lankans now domiciled overseas. It will not be easy – but if they make an effort to come back home and see for themselves (as I have done) the optimistic overall picture and the work currently in progress, I am sure it will encourage them to find ways of making their own contributions.
From a personal level, it was heart-warming to return and rediscover what is being done in these parts and how well Jaffna is doing. My visit has given me hope about Sri Lanka’s post-war future. The nation in general – and Jaffna in particular – are certainly progressing well on the road to recovery.

This entry was posted on November 16, 2013 by Dr. Sanjiva Wijesinha in Uncategorized and tagged Jaffna, Kankesanturai, LTTE, sri lanka.